Femininity, Style and Beauty from a middle-aged black woman’s point of view…. 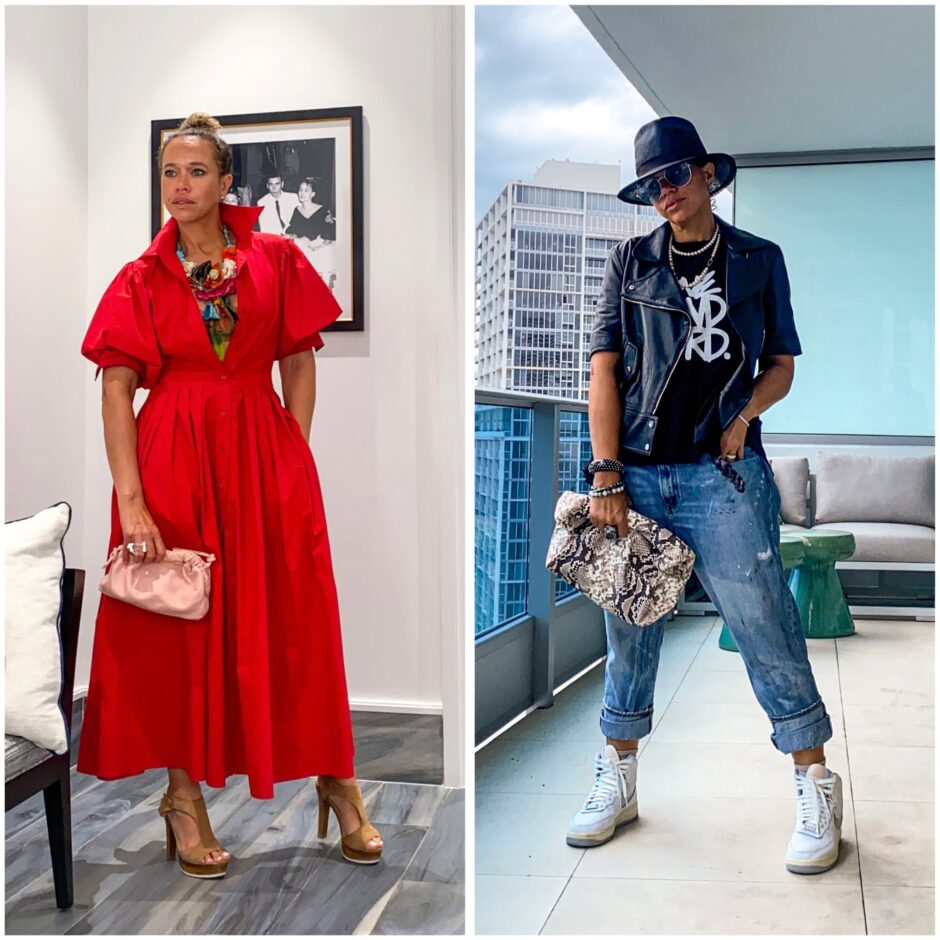 I am an almost 45 year old black woman obsessed with style, modernity and beautiful things.  My opinion is that buttocks out, provocative poses and taking the bedroom into the streets is inappropriate.   Call me an ”auntie,” but I also agree that bonnets on airplanes, fake eyelashes that reach the hairline and clothes that are several sizes too small are silly.  None of the above has anything to do with feminism, control over ones body or even beauty.  It’s just poor taste. Period.  Call a spade a spade.

When did we decide as black people that we would celebrate vulgarity over elegance?  Was there some meeting I missed where we voted on the notion that black femininity would be synonymous with too much skin, cartoon characters and public displays of Karma Sutra positions paraded as sexy picture poses?  I clearly wasn’t invited to the weekend brunch meeting of the minds where we as black women decided that we wanted to be more like 90s Madonna verses Claire Huxtable.

But whatever, every generation is entitled to determine their trends.  The beauty of being young is the privilege to make really poor fashion choices and live to tell the tale.  Hell, I wore a butterfly sequined crop top, low rise acid-washed stretch jeans and blue eye shadow to my 24th birthday party.  No, I wasn’t trying out for the Spice Girls. I was actually a 2nd year law student at Georgetown University with a signed offer to work at a major law firm in New York City.  I also had a favorite pair of BCBG neon yellow, low rise, polyester hot pants that were my favorite club attire for nearly a decade.  I remember and appreciated the hoots, stares and offers I received from men when my size 10 derrière would sidle by.  I am no stranger to sexy clothing.  I fondly remember those years.

But then I grew up.  In 2009, I was 32 when I distinctly remember the ahh-ha moment seeing then 45-year old First Lady Michelle Obama walk hand in hand with her fine, excellent and very powerful black man into the Nobel Peace Prize ceremony wearing that sublime, black, a-line Azzedine Alaia dress with modest, unrecognizable Jimmy Choo heels.  She had easy hair.  Pretty makeup.  Glowing skin. A wide genuine smile.  She was elegance personified but not stuffy or unapproachable.  In that moment, I knew who I wanted to emulate in my 30s, 40s and 50s chapters.

Last night,  I eagerly tuned into the Super Bowl 2022 halftime show to watch this much anticipated homage to Hip-Hop.  The only black woman performing was Mary J. Blige who has more hits than hits have hits.  She could singularly do a 2-hour stadium show that is a sing-along because every attendee from 80 – 16 years of age would know those anthem lyrics of power, love and redemption.

Imagine my shock when she awkwardly appears on stage wearing head to toe white reflective sequins broken up by a crop top, bedazzled diaper-esq high waisted boy shorts, thigh-high boots plastered in even more sequins, a matching sparkling fedora and enough fake dyed hair that it reached her knee caps.  Perhaps the outfit looked awesome in person and it seems to be photographing well today online. But on live television, it did not hit the right note. It looked awkward and ill-fitting, particularly when Mary dropped it low in the open leg squat.

Mary is a gorgeous black woman.  She has a hall-of-fame life story and career that is courageous, exceptional and cross generationally interesting.  Like I said, Mary’s hits have hits.  However, I don’t even recall what she sang last night.  I don’t even care.  All I can think about is what she wore.  Why she wore it.  And where were her girls saying what I hoped they said and what I want to now say:

“Girl, YOU are Mary-J-Damn-Blige.  You’re 50+ years old and still relevant, sexy and marketable as ever.  Let them show your videos of 20 years ago where you were rocking the hell out of crop tops, glitter and hot pants.  You did that era and you did it WELL. Better than best. Mary, now is your moment to go out out on that Super Bowl stage, perform and essentially accept your Nobel Peace Prize.  Let’s call up Givenchy, Chanel, Christopher John Rogers, Louis Vuitton or Dior and have them make a costume elegant and fitting of a queen but also seriously hip-hop, edgy and so fricking interesting that Zara will be cutting, sewing and selling copies by sunup. Be imitable not impressionable.”

That’s not what happened.   There is so much to break down.  I don’t know if Mary hand picked that white sequined diaper look or if she was talked into it by a stylist with poor judgment.  Or maybe she felt pressured by the ever present “male Hollywood daze” to dress in what men perceive as sexually interesting.  I certainly see my non-Hollywood, very normal life living peers doing that often on social media.  You know who you are….

Anyway, it’s complicated.  Many of you will disagree because we want to believe that at middle age we can still dress like a 25 year old.  We can’t.  We shouldn’t want to.  I will be hung for writing the above because it’s personal for some and because how dare I critique the only black woman on the stage (Why was there only one black woman by the way? Perhaps I would feel differently if there were various representations of black women up there performing. Are we a monolith or are we just supposed to think one-dimensional?).

You will say Mary has aged well.  She has.  So have I.  So have many. This is not a critique of what women can wear in middle-age.  This is a question about who are we and who do we want to be.  Whether you agree or not, let’s get one thing very clear.  You will be not be seeing my yellow polyester hot pants ever again.  I traded them for enduring, elegant and avant-garde modern pieces a long, long time ago.

I said what I said.

PS: I wish the butterfly crop hadn’t been purged or lost many years ago. If I still possessed it in my fashion archives, I would bust it out to wear with a Carolina Herrera ball gown skirt, Chanel earrings, an oversized cocktail ring, some crazy clutch and a boyfriend blazer nonchalantly thrown over my shoulders. In my opinion, that is style…